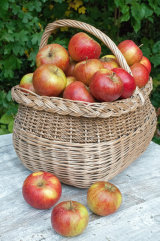 If you like apples Gillespie Park was one of the places to be last Sunday, this seven acre ecology park in Highbury, next to Arsenal’s Football Stadium was hosting its second apple day. Over a thousand people enjoyed the event held in and around the Islington Ecology Centre which was organised by the Friends of Gillespie Park and the ecology centre staff.

There were twenty different varieties of organic apples all labelled and laid out in a semi-circle in cardboard boxes ready for tasting and juicing. These heritage apples come from the National Fruit Collection at Brogdale Farm near Faversham in Kent which is one of the largest fruit collections in the world.

There are varieties with wonderful names such as, Christmas Pearmain, Nonpareil and Lord Lamborne. Not to mention those which sound like other fruits: Barnark Orange and the better known Blenheim Orange, along with Pitmanston Pine Apple and Winter Banana!

Lots of varieties have Pearmain as part of their name, Mannington’s Pearmain or Worcester Pearmain for example which means pear shaped apple.

Visitors had a lovely afternoon visiting the stalls, listening to the music and eating the apple related food prepared in the Sunday Café and some people even brought along their own apples for juicing.

The children were happy helping with the juicing, getting wet apple bobbing, competing for the longest peel or playing William Tell with a rubber arrow.

The apples were the star of the day and happily there has been a renaissance in apple growing in this country after many orchards were grubbed out in the 1990’s due to EU subsidies. We should be buying more British apples particularly the older more vulnerable varieties such as Lord Lamborne pictured left so that future generations can enjoy them.
Next
Previous